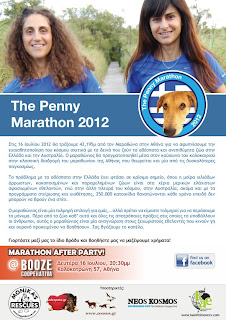 On Monday, 16 July this year, we're going to run 42 kilometres from Marathon to Athens to raise awareness of the plight of unwanted animals in Greece and Australia.
Description
The run, which follows the footsteps of Athenian messenger (and original marathon runner) Pheidippides, will take place under the blistering Greek sun along one of the toughest marathons in the world.

As legend has it, after running the distance to announce the Greek victory over Persia in the Battle of Marathon (490 BCE), Pheidippides died on the spot.

We kind of hope it doesn’t end like that for us.

As Australians, you can't go on a holiday to Greece and not notice the stray cats and dogs. Most of us don't want to be confronted with the reality of what these animals need to do to survive. Most live under brutal conditions – and it’s not necessarily the lack of food and shelter but rather what these animals experience at the hands of people.

When I worked as a journalist in Greece, my colleagues, Chrisanthy Efstathiou, Alexis Skarantonakis and Elena Caramallis, and I, started an ad hoc shelter at the back of our workplace. We didn't plan to; it just developed out of a need to help desperate animals that stumbled across or were abandoned at the site.

We have a situation right now where a stray pup was run over by a Greek government employee. He got out of his car, saw that she was writhing in pain on the side of the road, got back in his car and drove off. The pup is now being cared for by our colleagues, Karen Rolland and Aki Giannikopoulos. The pup, who we call Vera, has had surgery but may have to have her hing leg amputated (in a separate act of senseless cruelty, she also had her tail cut off). You have your hands full trying to find a home for a stray cat or dog in Greece ... but one with a disability? You stand next to no chance.

You hear cases of neglect, abuse and cruelty every day. But these cases are
not unique to Greece. We found our dog, Ajax, wandering the streets of Sydney. He was in bad shape, and had obviously run away from an abusive owner. We put him through the system, which inevitably meant the pound and the threat of euthanisation, but adopted him as soon as we legally could.

In Australia, even with its neutering and adoption programmes, over 250,000 pets are killed ever year because they are unwanted and cannot find homes. But there are organisations like Sydney’s Monika’s Doggie Rescue that save as many animals as they can from death row in council pounds.

The people at Monika’s Doggie Rescue and my colleagues that run our small, informal shelter in Greece do amazing work; the kind of dirty work that most of us don’t want to know about. The marathon is as much a way to honour them as it is the animals they try to save.

The money we raise will help these two shelters.

Why is it called the Penny Marathon? Penny was one of the first dogs to stumble onto the Greek site. Sadly, her life was short lived. But she’s not forgotten! Penny, this one’s for you, sweety!